Frequently-asked Questions About the Decline of Squam’s Loons

Could these contaminants be coming from the ocean, rather than from Squam?

LPC’s data indicates that ocean contaminants and pathogens, while present, are unlikely to be the driving force behind the decline of loons on Squam. Data from banding done by LPC and the Biodiversity Research Institute in Gorham, Maine, indicates that Squam’s loons do not migrate or overwinter as a group. Loons breeding on Squam probably overwinter over a large stretch of the Atlantic, from Maine to Rhode Island. Therefore, any contaminants or pathogens picked up on the ocean would affect loons on many lakes and not be specifically focused on Squam as these declines seem to be. Research also indicates that the materials in eggs primarily come from recent (within three week) dietary sources, an additional fact pointing to Squam as the source of contaminants in loon eggs.  Stable isotope testing conducted by LPC on these eggs indicated that, while there may be some mix of freshwater and ocean sources supplying nutrients to the egg, the majority of the material deposited in the egg comes from freshwater sources.

Could Squam’s loons simply be migrating to nearby lakes rather than expiring?

LPC’s research and monitoring indicate that emigration of loons cannot explain the drop in Squam’s loon population. We know from tracking the movements of banded loons that few loons disperse farther than 10 miles after they have lost a territory. LPC has not recorded an increase in the loon population of neighboring lakes, and banded loons that have disappeared from Squam have not been sighted on other lakes. These findings suggest that the territories vacated on Squam during the decline are a result of mortality, rather than emigration of loons.

Could the Squam eagles be contributing to the decline?

Like recreational use of Squam, eagles are more likely to contribute to reduced productivity of loons than to mortality of adult loons. There have been a few cases of eagles predating adult loons in the Midwest, but these loons are only half to two-thirds the size of our large New England loons. Eagles established themselves on Squam in 2002 and first bred successfully in 2003, and Squam loons fledged 26 chicks over those two years. It is possible that Squam’s eagles might have developed a taste for loon chicks over the past several years, but LPC has not heard of any eye-witness accounts of eagles predating loon eggs, chicks or adults on Squam. 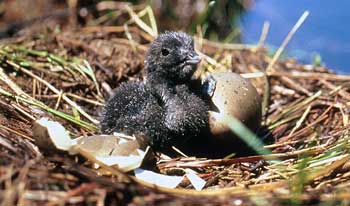 Could density dependence (i.e., too many loons) on Squam have contributed to the decline?

Data collected by LPC since 1975 does not indicate that density dependence is a factor on Squam Lake.  Although loon chicks have been killed on Squam by intruding loons, there is no clear relationship between the number of loons recorded on the lake and the rate of chick survival on Squam. If density dependence was impacting adult loons, we would expect to find carcasses of adults killed by other loons. Since 2004, only one adult loon has been collected on Squam that was killed by another loon.

What are the next steps for the Squam Lake Loon Initiative?

Click here for the latest report to learn more about what has been happening on Squam recently.