With the help of collaborating veterinarians, LPC has obtained a necropsy (animal autopsy) for every dead loon that we have recovered since 1989. These necropsies reveal that lead poisoning from ingested lead fishing sinkers and lead-headed jigs is the largest cause of known adult loon mortality in New Hampshire. Since 1989, lead poisoning from lead fishing tackle has accounted for 42% of documented loon deaths in New Hampshire.

LPC’s data regarding the effect of ingested lead fishing tackle on New Hampshire’s loon population resulted in first-in-the-nation legislation to restrict the use of small lead sinkers and jigs on lakes and ponds within New Hampshire in 2000. In 2005 and 2006, New Hampshire extended this legislation to first ban the use of this tackle on all freshwaters in New Hampshire and then ban the sale of this same tackle. The most recent legislation, which restricts the sale and freshwater use of all lead sinkers and lead-headed jigs weighing one ounce or less, was passed in 2013. This bill went into effect June 1, 2016 and once again made New Hampshire a leader in safeguarding loons from this avoidable cause of mortality. 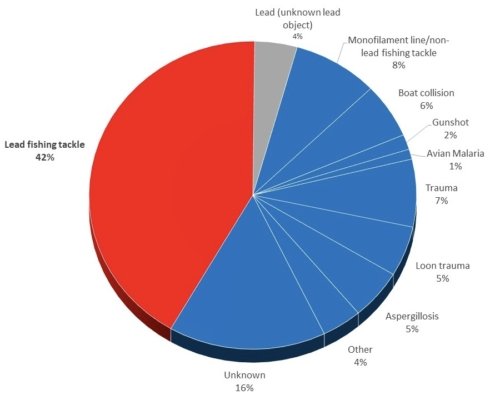 Lead fishing tackle is the single largest cause of documented loon mortalities in New Hampshire. 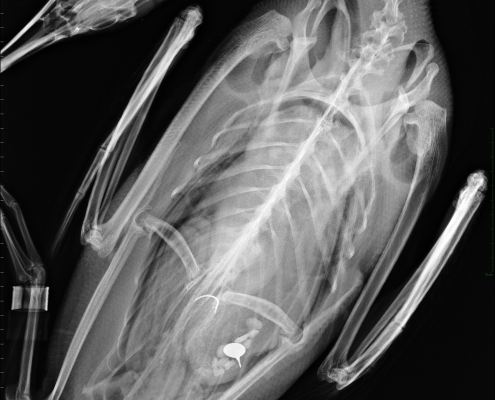 Bans on the sale of lead fishing tackle play an integral role in protecting loons because they help to prevent new lead tackle from entering the system. Since the lead tackle known to kill loons can no longer be sold or purchased in New Hampshire, the next step to protect loons is to remove illegal lead tackle from active use. In 2018, LPC partnered with New Hampshire Fish and Game to conduct a first-in-the-nation lead tackle buyback program. The program provides a financial incentive to encourage anglers to make the switch to non-lead fishing tackle. Buyback participants exchange 1 ounce or more of illegal lead tackle at participating locations for a $10 store voucher. These vouchers can then be used to purchase loon-safe tackle or other supplies. Since 2018, we have collected over 14,800 lead sinkers and jigs weighing one ounce or less. Had they remained in circulation, any one of these pieces of tackle could have killed a loon.

How do loons ingest lead?

The yearly peak of loon deaths from ingested tackle coincide with the peak of fishing activity on NH’s lakes. This and other evidence indicates that loons primarily ingest fishing tackle from active use. Loons can swallow lead sinkers or jigs attached to a fish that has broken an angler’s line or may strike directly at a piece of tackle on an angler’s line as it is trolled or retrieved. Loons may also swallow lead tackle from the lake bottom along with the pebbles they ingest to help grind up and digest food; however, LPC’s data suggests that this is less common. The ingestion of lead fishing tackle is virtually always fatal for loons, with death typically occurring within 2–4 weeks. 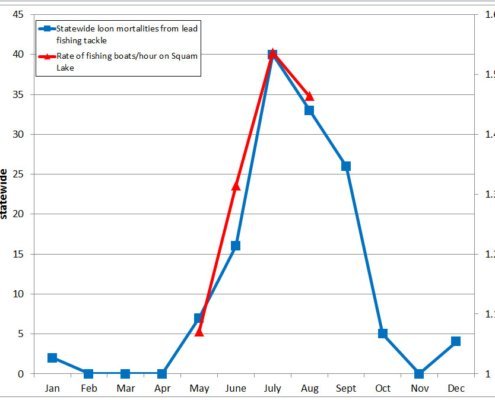