We can blame it on the new moon. It was pitch black in the dead of night; Mama couldn’t see past her nares. All she wanted to do was turn the egg a bit so she could get more comfortable. She knew she had messed up when she plopped down and found herself sliding down the exterior slope of the nest, egg in tow. What followed was three hours of confused and horrified desperation. She came so close to getting the egg back in the bowl but just couldn’t manage the last few inches. She cried for help but only got a string of distant yodels in return. Cheeky chatters theorized that hubby was hanging out with the boys at the Sand Bar. A forlorn Mama eventually left the nest area.

Eggs being knocked out of the nest or otherwise misplaced is probably more common than you would think. Over the years, the loon cam has recorded this happening two other times, as well as one egg being broke and removed from the nest by the loons. Loons are built to be in the water and are very awkward when on land. This is one reason you should never approach a nesting loon. If you flush it off the nest there’s a good chance it will either kick the egg out the back or drag it out the front.

Along about 4 am, with the first faint rays of morning twilight, Dad showed up from his all-night carousing. With no Mrs. around, he climbed up on the raft and saw the egg on the wrong side of the rim of the bowl. No problem; He gave it nudge and, voila, back in the bowl. He then promptly lost balance and slid down the slope into the predator guard. Dad really needs to cut down on his all-nighters at the Sand Bar. He climbed back up and sat on the egg for while before remembering he had an early appointment and took off. Shortly later Mama came back, looked at the raft, couldn’t see the egg in the bowl, circled the raft a half dozen times and swam away, still in despair. It wasn’t until 10 am that she finally realized the egg was back in the nest.

Oh, and by the way, that evening Mama laid her second egg at 7:23. Sitting on two eggs and watching the sun set over a mirror-calm lake, Mama figured life isn’t all bad.

You can watch the low-lights of Mama’s bad day here. And the highlight here. 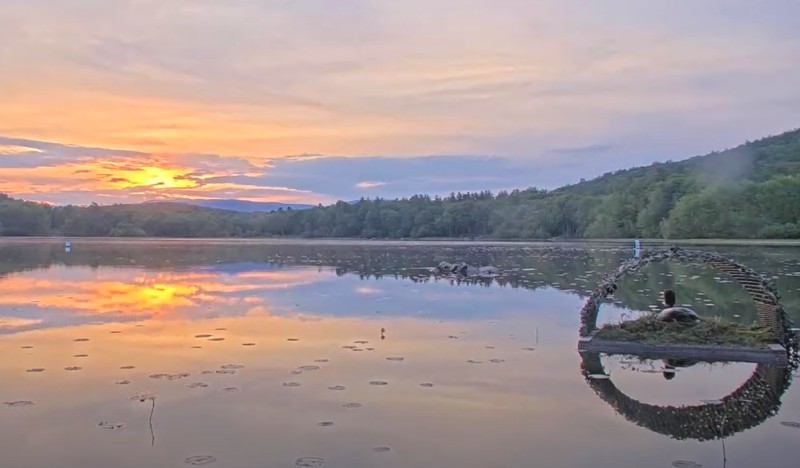