In January of 1996, the North Cape barge ran aground and spilled its cargo of home heating oil off the coast of Rhode Island. The spill killed more than 400 wintering loons, most of which are believed to have summered in northern New England and southern Canada.

The Loon Preservation Committee’s data on loon populations, productivity, and threats to loon populations provided the foundation for determining the amount and type of restitution required from the responsible party. LPC’s large number of members and volunteers demonstrated strong public support for loons and the need to replace the loons killed as a result of the spill. LPC’s data resulted in a $3 million settlement to protect loon nesting habitat in northern New England and increase loon productivity to help replace loons killed in the spill.

In April of 2003, the Bouchard Barge 120 struck bottom and spilled its load of No. 6 fuel oil into Buzzards Bay in southeastern Massachusetts, killing more than 200 wintering loons. LPC coordinated the efforts of a number of conservation organizations to track the dispersal and fate of loons not killed outright by the spill. Our data will be instrumental in determining restitution to help replace loons lost in the Buzzards Bay oil spill. 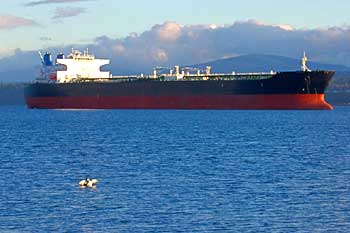 The North Cape and Bouchard oil spills killed over 600 loons wintering off the coast of New England.
Scroll to top