Effects of Lead Fishing Tackle on Loons in New Hampshire

Photo credit: Mark Wilson
One of the 11 loons that died in 2010 from ingested lead fishing tackle,
with the legal-sized jig (below) removed from this loon.
To see the toxic effects of lead poisoning on loons, click here
for a video of a loon dying after ingesting lead fishing tackle.
Please note: this video is disturbing.

We found that 49% of the New Hampshire adult loon mortalities LPC collected from 1989-2011 resulted from ingested lead fishing tackle (Figure 1).

In 2000, legislation took effect in New Hampshire to restrict the use in lakes and ponds of lead sinkers weighing one ounce or less, and lead-headed jigs measuring less than one inch in length (including the hook). Subsequent legislation to restrict the use of these tackle in all freshwater in New Hampshire took effect in 2005, and the sale of these tackle was restricted beginning in 2006. Our analysis comparing pre- and post-restriction periods (1989-1999 vs. 2000-2011) found that the rate of lead fishing tackle mortalities in New Hampshire loons fell subsequent to these restrictions (Figure 2); however, this reduction has not been large enough to protect our loon population, and recently (2006-2011) rates of lead tackle mortalities have begun to rise once again.

Loons can ingest lead fishing tackle by ingesting a fish with attached tackle or by striking at tackle or a fish being retrieved through the water. Loons may also mistake a small piece of lead for the pebbles they ingest as grit. Although the typical prey of loons is yellow perch, loons can ingest larger fish, especially those impaired in some way, e.g., by carrying lead tackle. Dr. Mark Pokras of Tufts University and staff at USGS National Wildlife Health Center have found fish with attached tackle in loons’ digestive tracts.

Our data indicates that much of the ingested lead tackle in lead-poisoned loons results from current fishing activity. If loons were ingesting tackle primarily from a reservoir of lead tackle on lake bottoms, we would expect an even distribution of mortalities throughout the time loons are on lakes (mid-April through October). However, lead tackle mortalities  are strongly correlated with the peak of summer fishing and tourist season in July and August (Figure 3). We found associated tackle (hook, line, swivel, leader) in 66% of loons with ingested jigs and/or sinkers, also indicating ingestion from current fishing activity.

Figure 3. The strong correlation in the timing of loon mortalities from ingested lead fishing tackle and of fishing activity indicates that mortalities result from current use rather than a reservoir of tackle on lake bottoms.

Ingested jigheads removed from dead loons have lost the hook, which breaks off in the gizzard soon after ingestion. When we added the average length of jig hooks to the length of the eroded jigheads removed from loons, we found that jigs ingested by New Hampshire loons were larger than those currently banned in New Hampshire (i.e., these were legal jigs) (Figure 4). From 2000-2011, legal-sized jigs comprised 52% of the tackle found inside New Hampshire loons that died from lead tackle (Figure 5). Therefore, continued New Hampshire loon mortality from ingested lead tackle is a result of an inadequately protective standard for lead-headed jigs and inadequate compliance with New Hampshire’s legislation restricting use of small lead sinkers.

Figure 4: The total length of jigs ingested by New Hampshire loons from 1989-2011 exceeds the current standards. Extrapolated length of original jig=length of eroded jighead removed from each loon + average length of hook of purchased jigs from each size category. Total number of purchased jigs=57.

The majority of jigheads removed from New Hampshire loons weigh less than 0.5 oz. However, these eroded jigheads are missing the hook, broken off in the gizzard soon after ingestion, and enough of the mass of lead to fatally poison the loon. Researchers have found that 66% of the volume of lead shot in the gizzard of Canada geese dissolved within three days of ingestion. Larger jigs would lose a lower percentage of total volume in the same period but are also resident in the gizzard for a much longer time (estimated 2-4 weeks) before death. Therefore, the mass of the entire jig at ingestion would be greater, perhaps by a substantial amount.

The growth of New Hampshire’s loon population since 1975 has been accomplished through intensive management supported by the extensive contributions of a dedicated corps of volunteers. This exceptional effort has helped loons to overcome some of the negative consequences of human activities over the past 38 years. One of the most evident and successful of LPC’s management activities is the provision of artificial nesting rafts to loon pairs. Despite record numbers of nesting rafts floated by LPC staff and volunteers from 2006-2011 (a total of 276 rafts floated), the benefit to our loon population of our intensive raft program was entirely negated by 38 pieces of lead fishing tackle.

Despite record levels of management and outreach, New Hampshire’s loons have achieved the minimum reproductive success required to sustain their population in only two of the past seven years. New Hampshire’s loon population remains far below its estimated historical abundance and carrying capacity and the challenges facing loons continue to grow in number and in scope. Population declines would initially result in decreased numbers of juveniles and unpaired loons—segments of the population difficult to monitor and quantify—and impacts to the number of paired adults would appear only after several years. LPC’s statewide loon count in 2011 showed a drop in paired adults after a high number of lead tackle mortalities from 2006-2010 and poor reproductive success of our loons over the same period.

LPC’s Loon Recovery Plan projects a declining loon population based on published loon life history parameters, quantified stressors, and current levels of management. This projection should be considered optimistic given our limited knowledge and likely underestimation of the effects of present and future stressors and uncertainty about our ability to maintain and expand our research, management and outreach programs. This uncertain outlook makes it of prime importance to bolster New Hampshire’s loon population against future stressors by addressing critical issues like lead fishing tackle that can be mitigated through relatively simple measures like material substitutions. Lead fishing tackle ingestion has been documented in 28 other bird species, including bald eagles, great blue herons, and many species of waterfowl, and the Environmental Protection Agency considers 75 species to be susceptible to lead tackle ingestion; therefore, limiting the sale and use of lead fishing tackle would protect a host of other species as well. 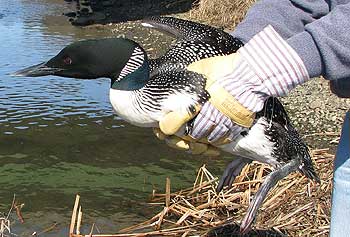