During the Loon Cam 1 chaos of the intruding loons on the evening of June 15, the parents decided it would be safer if they each guarded one chick. Mom took the elder chick around the bend and started fishing according to reports we received, while Dad and the 12 hour old chick remained near the nest, in camera range. While Mom was trying to feed the older sibling, she suddenly dove and disappeared. Most likely she sensed the intruders and went off to do battle, or at least distract them from the chick. The chick gravitated toward a nearby double seat kayak. Much to the occupants’ surprise, it appeared that the chick had decided they were a new-found parent. Fortunately, they were aware of the loon cam and the precarious situation the loons were in. With mom out of sight, the kayakers decided it was best to paddle over to the nest site. The chick went with them, practically glued to the kayak.

All this time another lake resident was reporting the activity on the YouTube chat, so it wasn’t a total surprise when the kayakers came into view on the camera. The little chick saw Dad and sibling and made a beeline for them. The kayakers smiled. What more can I say? The photos are courtesy of our Kayak Heroes. 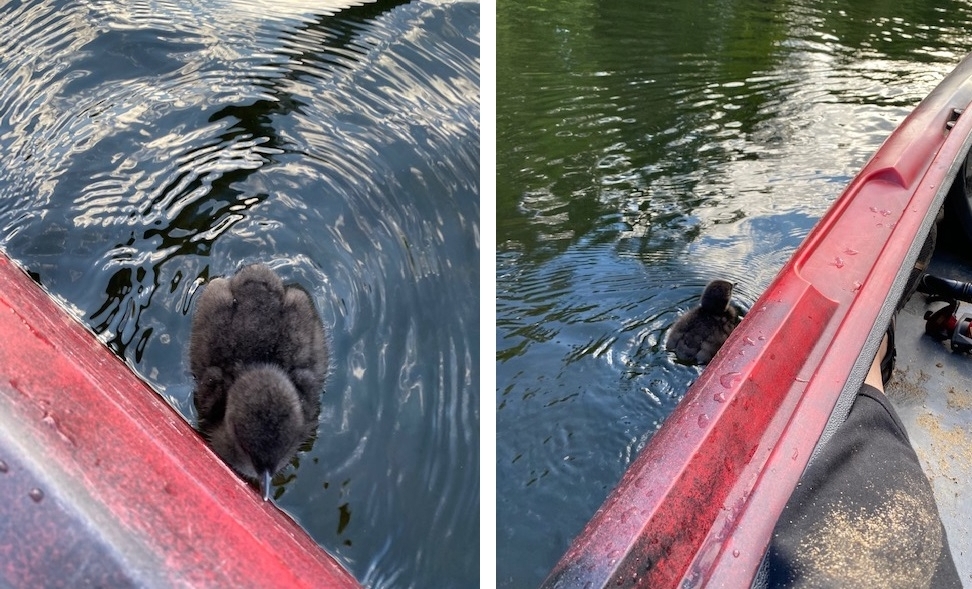 So was it imprinting? Was the chick still ready to accept more beings into its trust even after imprinting on two parents? That would be what conventional wisdom would dictate and I think that’s the best bet. The only reason I have any question is because I’ve spent enough time observing loon behavior to realize that (1) loons can recognize individual people (and judge their character), (2) loons can signal to chicks to stay and wait by a certain area while the adult takes care of important business, and (3) loons will temporarily turn the care of their chicks over to a trusted person. I’ve personally witnessed it and LPC has video documentation of another example.

Unfortunately for me, I’ve only made myself an enemy to loons, at least in their judgment. Chase a loon around a lake at midnight while shining a bright spotlight in its eyes, and then drag it into a boat and hold it down while it gets banded, and you’ll be branded an enemy for life. The worst tongue lashing I ever got came from the Lincoln Island female when I went back the next day to do a welfare check.

LPC does not recommend that you paddle up to a loon and introduce yourself or invite it to dinner. That will be counterproductive; loons don’t like pushy people. But if you spend a lot of time on one lake with loons, keeping your distance and enjoying the sight, a loon might pop up right beside you. That’s your chance to show that you’re no threat. Chill and enjoy the amazing treat. Let the loon decide when the visit is over. Always leave it up to the loon.