Member a Day in May Membership Drive

Since 2014, the Loon Preservation Committee has held an annual membership drive during the month of May. The goal of the drive is simple: gain at least one new member each day of the month, for a total of 31 or more new members whose support helps us to fund our important work on behalf of loons in New Hampshire.

The Loon Preservation Committee is a 501(c)(3) charitable organization, and all contributions are tax deductible to the full extent of the law.

All new members during the month of May will be entered in a raffle to win one of four great prizes:

The “Tea for Two” Basket 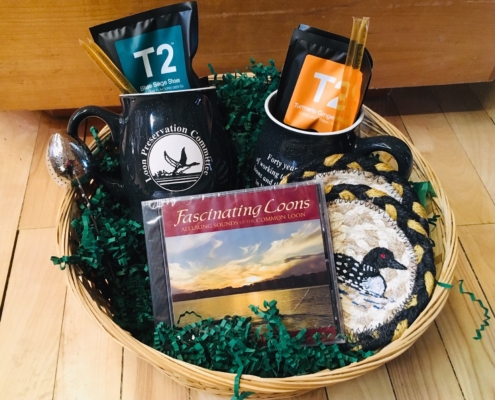 Perfect for the loon lover who enjoys catching up with friends or loved ones over a cup of tea! The Tea for Two basket includes two LPC mugs, two loon coasters, an assortment of teas hand-picked by LPC staff, a tea infuser, and a copy of “Fascinating Loons” (a cd of loon calls). 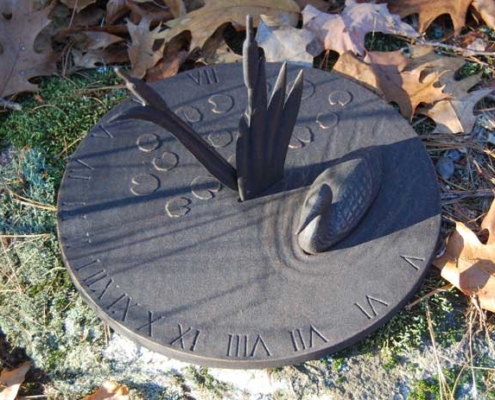 If you have a garden or yard  in need of some loon-themed decor, this is the prize for you! This bronze sundial features a loon on a pond, with a cattail shaped gnomon. Dimensions are 11.25″diameter x 8″ height.

For those looking to add some loon-themed items to their kitchen, the Loon Kitchen basket is a great prize! Functional as well as decorative, this basket includes two loon dish towels and a loon cutting board from Board in the Kitchen. Cutting board is made of recycled counter top material and comes with a wooden display stand.

For those looking to pass on their love of loons and lakes to the children in their lives, the Sweet Dreams basket is a great prize. This basket contains a loon night light and a copy of Good Night Lake by Adam Gamble and Cooper Kelly.

In addition to the chance to win one of these prizes, all LPC members receive:

Why Support the Loon Preservation Committee?

The Loon Preservation Committee works to protect loons and their habitats in New Hampshire. While our work focuses on loons within our state, its impacts are far-reaching and extend to other species (including humans!) both within and outside of New Hampshire’s borders.

Time and again, loons have proven to be a species whose health and well-being provides important information about the overall health of the systems that they inhabit. More often than not, the problems that affect loons also affect other species that inhabit or spend time on the same ecosystem, including fish, other bird species, and even humans. Research into the problems that impact loons can help to uncover problems that may also be impacting other species.

How will my membership dollars be used?

When you become a member of the Loon Preservation Committee, your membership dollars go directly toward funding our work, allowing us to: 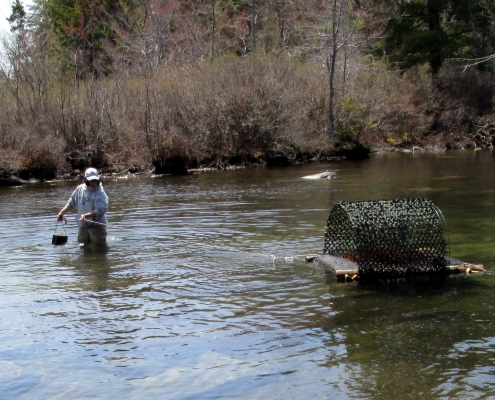 LPC Squam Lakes Biologist, Tiffany Grade, floats a loon nest raft. This was one of 85 rafts floated by LPC staff and/or volunteers on New Hampshire lakes in 2020. 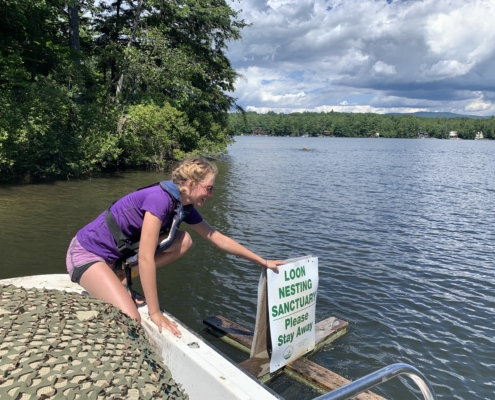 LPC Conservation Intern, Emily Zubieta, retrieves a sign that was used to protect nesting loons on Lake Winnipesaukee. These loons were one of the 135 nesting pairs that were protected by LPC signs and/or rope lines in 2020. 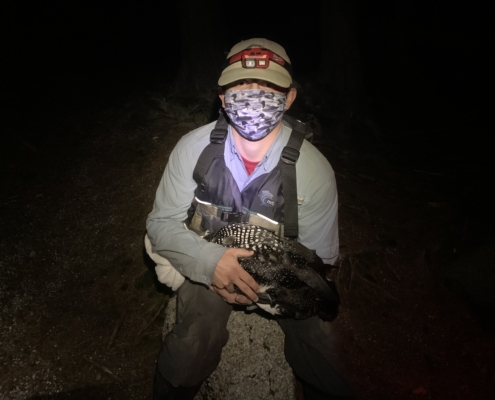 LPC Monadnock Region Biologist, Griffin Archambault, holds an adult loon during a night of banding. This loon was one of 18 banded by LPC staff in 2020. 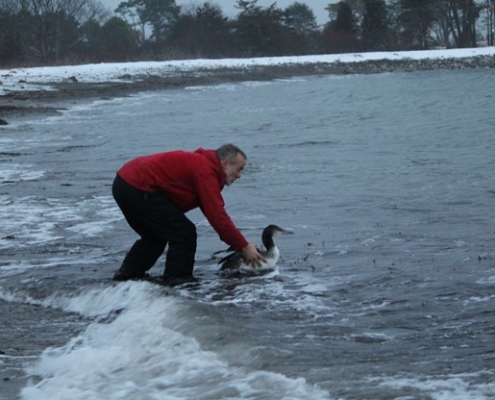 LPC Senior Biologist, John Cooley, releases a loon onto the ocean in December. This was one of five iced-in loons that was rescued by LPC staff this past winter, and one of 33 loons rescued in 2020.

Become a Member
Scroll to top