Between the fall of 2004 and the spring of 2005, Squam Lake lost seven of its loon pairs. The decline from 19 to 9 pairs represented 44% of Squam’s loon population, a drop unprecedented on Squam or any other large lake in more than 40 years of LPC’s history of monitoring loons throughout New Hampshire. It also brought Squam’s loon population to its lowest level since LPC began to survey Squam Lake in 1975. 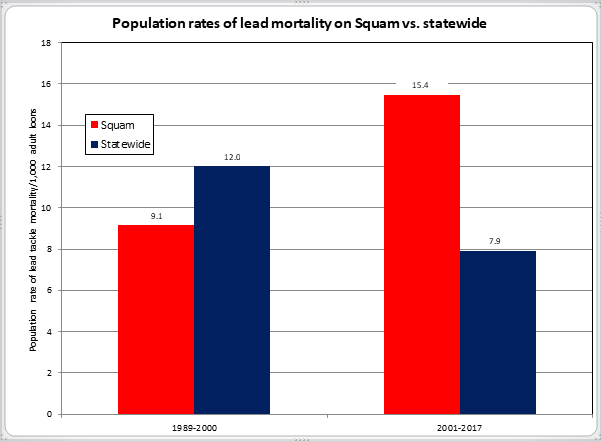 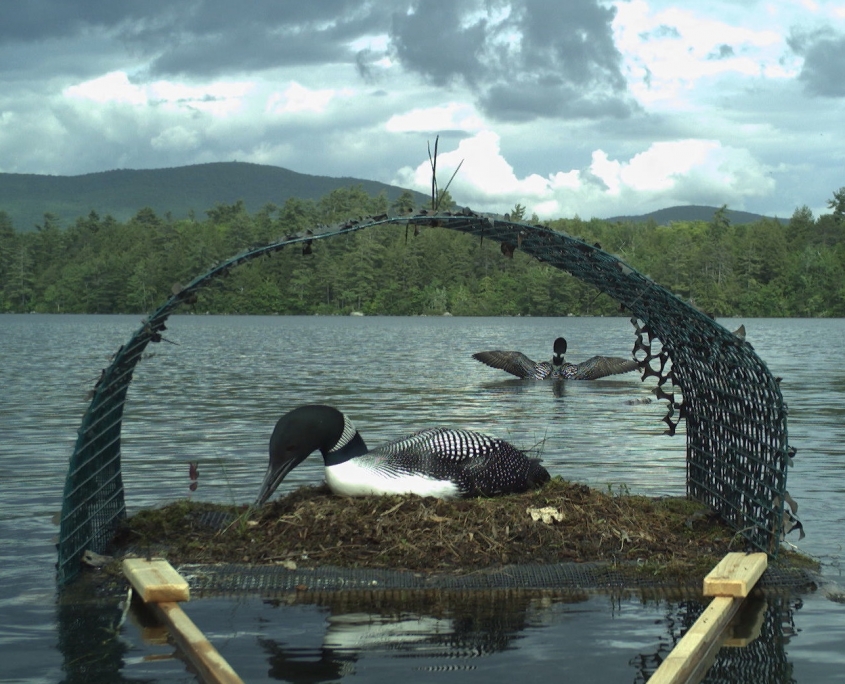 It has been a very busy week for the loons on Squam! Nests have seemingly been popping up all over! We had one nest last week, and this week four more pairs have gone on the nest! We now have four nests on Squam Lake, and the pair on Little Squam is nesting also! This is a very good start, and I hope that all the pairs will do well and that more pairs will catch the “nesting bug” soon!

Please remind neighbors and lake users to give nesting loons all the help they can by keeping their distance from nests and respecting the protective signs and ropes around the nest areas. I received a report that we had a close call this past week when people trespassed near one of the nests, flushing the loon from the nest. Thankfully, the loon returned, but repeated disturbances (or one really bad disturbance) can cause loons to abandon their nests. Thank you for helping to spread the word!

Loon Preservation Committee’s (LPC) annual Summer Luncheon and Auction is coming up on June 24th! Our featured speaker this year is Steven Curwood, the host of Public Radio’s “Living on Earth.” The deadline for reservations is June 14th–please call LPC to join our celebration of loons (603-476-5666)!

Please see the P.S. below for this week’s edition of “Meet the Loons of Squam,” where we’ll meet a loon that has made a triumphant return to his territory after I feared he was dead–what a comeback! As always, please don’t hesitate to contact me with any questions or reports, and please call LPC to report any sick, injured, or dead loons (603-476-5666/603-476-LOON).

Thank you for your interest in Squam’s loon! Tiffany

P.S. “Meet the Loons of Squam”–Sturtevant Cove: Sturtevant Cove definitely saw quite the comeback this summer, much to my happiness! The male loon from two years ago, who I feared was dead, is back and looking as good as ever! As we pop the champagne, let’s backtrack a little bit to find out what happened to him and this pair.

This male was originally banded in Sturtevant Cove in 2013, and he was paired with a female who had moved in from Kimball Island and taken over the Sturtevant territory in 2010. They successfully raised one chick that year, but 2014 saw a succession of other males attempting to take over the territory from this male. He managed to hang on; but, due to all the fighting, the pair did not nest that year. 2015 brought another change, with a new, unbanded female in the territory. His previous female was still on the lake but obviously unable to hold the territory. The pair raised one chick, and LPC banded the female that year so we could begin tracking her.

Everything seemed to bode well for the pair in 2016. Both pair members were back; and, spurred on by their success of the previous year, they got right down to the business of nesting, hatching two chicks by the end of June. But a dark cloud was looming on the horizon, which first became apparent when we captured the pair to collect new samples. To our concern, the male was unusually lethargic while he was in the boat. The results of his blood work were concerning as well, showing indications of chronic stress or poor health of some sort. Unfortunately, the tests could not tell us more–simply that something was not right with this loon.

Sadly, this was borne out when another male intruded on the territory. We often see that loons are finely attuned to sickness or weakness in other loons and quickly move in to take over the territory, and this is exactly what happened in Sturtevant. The Sturtevant male was driven out, and one of the chicks immediately disappeared, presumably killed by the new male, as is normal. Much to my surprise, the second chick hung on for several days–this is quite unusual in these territory takeovers. The Sturtevant female tried to feed and care for it, but being a single parent is not easy for loons and the new male was hostile to the chick. To make matters worse, the female who had been paired with the Sturtevant male in 2013-2014 was jockeying for position and making life difficult for the Sturtevant female too. She hung on; but, sadly and predictably, the chick disappeared after several days.

I did not see the old male for the remainder of the summer of 2016. In 2017, an unbanded male was in the territory (likely the male who took over in 2016), along with the same female. Together they hatched the only chick on the lake last summer. There was still no sign of the old male around the lake, and I feared he had died. Between his lethargy during banding, his blood work indicating something was wrong with him, and his subsequent eviction, his absence seemed to not bode well, that perhaps he had not survived the fight and any injuries he may have sustained or his poor health. Imagine my surprise when I saw him this summer, paired up with the same female! They have already been looking at potential nest sites. Kudos to the Sturtevant male, back from the brink and hopefully getting ready to raise some more chicks!

Welcome to the 2018 Squam Loon Season!  Despite the late ice-out this year (April 27th, latest since 2001!), the loons are off to a fast start!  Loon pairs are mostly settled in their territories, and one pair is already on the nest!!  Hopefully other pairs will follow suit soon and it will be a nice, quiet nesting season for Squam’s loons.

I do need to update you on a very unfortunate situation from last fall on Squam.  In late October, our friends at Squam Boat Livery alerted us to an immature loon that was tangled in fishing line in the channel between Squam and Little Squam. 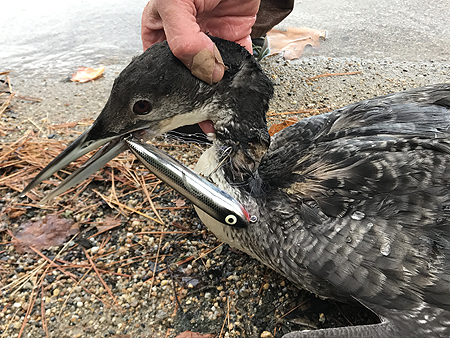 We captured it in Cotton Cove and found a large lure lodged in its bill and neck and fishing line wrapped tightly around its neck.  We took it Meadow Pond Animal Hospital in Moultonborugh, where the vets made a tremendous effort to try to save the loon.  Sadly, it did not make it.  This was a loon that was migrating through Squam–not the chick from Squam last year–but, sadly, its migration ended here.

With fishing season well underway, please remind your neighbors and other lake users to reel their lines in when loons are in the vicinity and to use only non-lead fishing tackle.  Loons mistake lures being reeled in for fish and will strike at them, becoming tangled up as this young loon did and possibly ingesting tackle.  Please ask anglers, if a loon comes in the vicinity of where they are fishing, to refrain from casting until the loon moves on.

I’m sure you will all remember that we had a loon die from lead tackle ingestion on Squam last summer, and we have already had 3 lead-poisoned loons elsewhere in the state this spring–2 have died, and one is with a wildlife rehabilitator fighting for its life.  In addition to spreading the word to neighbors and lake users about using only non-lead tackle, please check for old tackle boxes in your garages and boat houses.  Old tackle boxes are full of lead.  A good rule of thumb is, if the tackle is old, it’s lead.  Please clean out those old tackle boxes and re-stock them with non-lead tackle.  The Loon Center, Squam Lakes Association, and NH Fish and Game offices are all ready to accept old lead tackle and dispose of it safely and properly.  Thank you very much!

If you are looking for something to do when you have visitors at the lake, don’t forget the loon cruises!  Loon Preservation Committee is once again partnering with our friends at the Squam Lakes Natural Science Center to offer loon cruises this summer!  They begin next Friday (June 8th) and will run on June 15th and June 22nd and then Monday’s and Fridays from June 25th through August 31st at 3:00.  For more information, visit https://www.nhnature.org/programs/loon_cruise.php.  Hope to see you on a cruise!

Our series “Meet the Loons of Squam” will resume next week!  If your portion of the lake wasn’t covered last summer, don’t worry–we’ll visit it this summer for a look at the fascinating and complex lives of the loons that live there!  As always, please don’t hesitate to contact me with any reports or concerns, and please call the Loon Preservation Committee to report any sick, injured, or dead loons (603-476-5666).

I’m very excited we already have a nesting pair this summer, and let’s all work together to help make 2018 a great year for Squam’s loons!